Share
Tweet
Pin
0 Shares
Odisha formerly known as Orissa is situated at India’s east coast. It sahres its boundaries with West Bengal,  Jharkand, Chattisgarh and Andhra with Bay of Bengal on the east. My father and mother lived in Odisha for nearly 5 years at their earlier stage of marriage. I was not born at that time but I have heard a lots of stories by mom and dad. My mom used to say that her stay in Odisha was the golden age in her whole life time. Only 6% of the population is vegetarian according to Wiki.  I have done Chenna Poda – a paneer based sweet from Odisha for ICC. This tarkari recipe was an entry to my WTML event. I didn’t think even once for choosing the dish for Odisha because this Besan Tarkari was in my to do list. The besan cakes after frying in oil tastes so cripy and yumm. So don’t finish off the whole plate before adding it to the gravy. Thiese cakes absorb all the liquid and becomes soft very fast. So add the cakes just before serving. And have the gravy on the thinner side. If the gravy is thick, you will end p with a dry curry rather than gravy.

Recipe Source: Pranathi
Ingredients:
For The Besan Cakes:
Water-1 cup
Besan/ Chickpea Flour-1 cup
Baking Soda-1/4 tsp
Khus Khus/ Poppy Seeds-1/2 tbs
Salt-to taste
Oil-To Deep Fry
For The Gravy:
Oil-2 tbs
Onion-2
Ginger Garlic Paste-3 tbs
Salt-to taste
Turmeric Powder-1/2 tsp
Tomato-2
Potato-2
Kashmiri Chilly Powder-2 tsp
Coriander Powder-1 tsp
Cumin Powder-1 tsp
Coriander Leaves- For Garnish
Procedure:
For The Besan Cakes:
1. In a pan, boil water along with salt and baking soda.
2. When it comes to boil, add the besan and keep on stirring until the dough becomes thick.
3. Add poppy seeds and give a nice stir and remove from flame.
4. When it is cool, add a tsp of oil and knead the dough until smooth.
5. Pat the dough on a plate into a thick square.
6. Cut into cubes.
7. Heat oil in a pn and deep fry the cubes carefully until crispy.
8. Remove from oil and set aside.
For The Gravy.
1. Peel the potatoes and cutinto cubes.
2. Deep fry these cubes in oil until golden. Set aside.
3. Heat oil in a pan and add onions.
4. When translucent, add in ginger garlic paste and saute until raw smell goes away.
5. Add tomatoes and fried potatoes.
6. Add all the spice powders and salt.
7. Add enough water to make a gravy. Cover and let it cook on medium flame for 8-10 minutes.
8. At the time of serving, reheat the gravy, add the cakes and serve immediately. 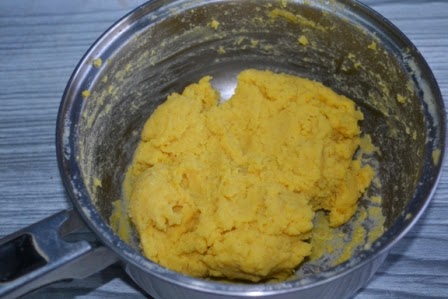 When cool, knead it to a soft dough.

PAt on a plate and cut into cubes.